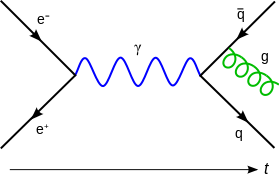 Particle physicists will soon attempt to reverse the direction of Einstein’s famous equation delineating energy-matter equivalence, e=mc2. Next year, they plan to crash quanta of light into each other to create matter. Cool or what!

Researchers have worked out how to make matter from pure light and are drawing up plans to demonstrate the feat within the next 12 months.

The theory underpinning the idea was first described 80 years ago by two physicists who later worked on the first atomic bomb. At the time they considered the conversion of light into matter impossible in a laboratory.

But in a report published on Sunday, physicists at Imperial College London claim to have cracked the problem using high-powered lasers and other equipment now available to scientists.

“We have shown in principle how you can make matter from light,” said Steven Rose at Imperial. “If you do this experiment, you will be taking light and turning it into matter.”

The scientists are not on the verge of a machine that can create everyday objects from a sudden blast of laser energy. The kind of matter they aim to make comes in the form of subatomic particles invisible to the naked eye.

The original idea was written down by two US physicists, Gregory Breit and John Wheeler, in 1934. They worked out that – very rarely – two particles of light, or photons, could combine to produce an electron and its antimatter equivalent, a positron. Electrons are particles of matter that form the outer shells of atoms in the everyday objects around us.

But Breit and Wheeler had no expectations that their theory would be proved any time soon. In their study, the physicists noted that the process was so rare and hard to produce that it would be “hopeless to try to observe the pair formation in laboratory experiments”.

Oliver Pike, the lead researcher on the study, said the process was one of the most elegant demonstrations of Einstein’s famous relationship that shows matter and energy are interchangeable currencies. “The Breit-Wheeler process is the simplest way matter can be made from light and one of the purest demonstrations of E=mc2,” he said.

Writing in the journal Nature Photonics, the scientists describe how they could turn light into matter through a number of separate steps. The first step fires electrons at a slab of gold to produce a beam of high-energy photons. Next, they fire a high-energy laser into a tiny gold capsule called a hohlraum, from the German for “empty room”. This produces light as bright as that emitted from stars. In the final stage, they send the first beam of photons into the hohlraum where the two streams of photons collide.

The scientists’ calculations show that the setup squeezes enough particles of light with high enough energies into a small enough volume to create around 100,000 electron-positron pairs.

The process is one of the most spectacular predictions of a theory called quantum electrodynamics (QED) that was developed in the run up to the second world war. “You might call it the most dramatic consequence of QED and it clearly shows that light and matter are interchangeable,” Rose told the Guardian.

The scientists hope to demonstrate the process in the next 12 months. There are a number of sites around the world that have the technology. One is the huge Omega laser in Rochester, New York. But another is the Orion laser at Aldermaston, the atomic weapons facility in Berkshire.

A successful demonstration will encourage physicists who have been eyeing the prospect of a photon-photon collider as a tool to study how subatomic particles behave. “Such a collider could be used to study fundamental physics with a very clean experimental setup: pure light goes in, matter comes out. The experiment would be the first demonstration of this,” Pike said.